Create .github/workflows/pages.yml in your master branch:

Previously with hexo-deployer-git plugin, we generate the static site locally and push those files to github’s master branch, which will be deployed to GitHub Pages server. The config in _config.yml is as simple as:

Now with GitHub Actions, a CI/CD platform available to public repositories, the build process can be triggered on remote servers whenever master branch is updated. Hexo provides an official document on how to setup the workflow, but it turns out the configuration can be a little bit simpler, thanks to the new versions of actions (we’ll cover it later).

A workflow is a sequence of jobs to build, test, and deploy our code. Here we only need one job named deploy to generate the static files and push to a branch.

A job consists of steps that either run a shell command or invoke an action to execute a common task. For instance, we have defined two steps to install node dependencies and build the static site:

Make sure you have the following scripts in package.json. Newer version of hexo already has them.

Under the hood, it searches for a local cache of the specific node version, where github provides last three LTS versions, or it falls back to downloading from the official site. The yarn package manager is pre-bundled by github, or you need a separate step to install it.

When it comes to caching the downloaded packages, setup-node action utilizes actions/cache. It caches the global package data, i.e. ~/.cache/yarn/v6 folder, instead of node_modules, so that cache can be shared between different node versions. setup-node generates a cache key in the form of node-cache-Linux-yarn-${hash(yarn.lock)}. See more about caching on GitHub Docs.

The static site is generated in public folder, and we need to push them into the gh-pages branch. There is an action peaceiris/actions-gh-pages that already covers this.

It first clones the gh-pages branch into work directory, overwrites it with the files in public folder, commits and pushes to the remote branch. The GITHUB_TOKEN is provided by GitHub Actions, with adequate permissions.

Last but not least, this workflow needs to be triggered on the push event of the master branch:

Here is a screenshot of this workflow: 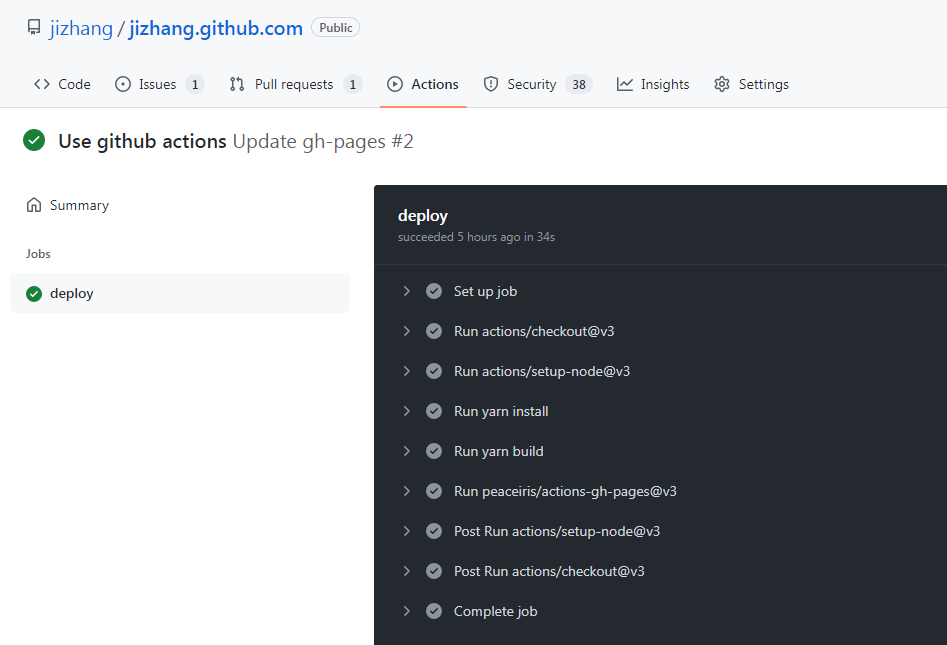